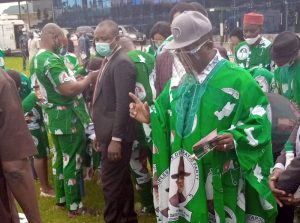 Three senators from Ebonyi State and a member of the Federal House of Representatives were among the party’s most prominent members who boycotted the PDP rally in the state.

This comes at a time when new leaders have been elected to lead the party for the next four years. No reason has been given for their absence from the meeting, but it could be attributed to allegations that they are in need of new state party leaders ahead of the 2023 general elections.

That is why during the meeting, Governor David Umahi called on party members to live in peace and harmony, saying there was no need for violence in the nation.

Governor Umahi is already persuading the party leaders to hold a special session on Thursday to seek reconciliation.

According to him, “I am the father of the state and we have worked together 2015, 2019. There is nothing that can divide us, whatever is any misgiving if any, let us discuss on Thursday and move forward. This is very important”.”