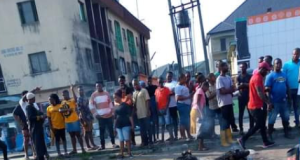 In a report confirmed to newsmen on Tuesday, December 8 by the Delta State Divisional Police Officer, “B” Division in Warri, CSP Benjamin Igometi, some angry youths have burnt to death three armed robber suspects.

Naija News learnt that the suspects had raided an apartment at Emeberin street in Warri in the early hour of Tuesday.

Reports revealed that two of the robbery suspects were caught and set on fire at an open space along Okumagba avenue by Emebiren junction. Subsequently, the third suspect was apprehended at Ojabugbe street, along Okumagba Road, where he was also lynched by the angry mob.

Naija News understands that the robbers met their Waterloo after the owner of the house they entered raised an alarm and vigilante group in the area acted without delay.

Confirming the incident to Vanguard in a telephone conversation, Igometi said: “They just called me now that some robbers came to attack in that area and they caught them and they were lynched. That’s what I heard.”

Meanwhile, a senior security staff working with the Nigerian Embassy in Germany, Mr Martin Oni has been fired after he was found guilty of the charges of sexual scandal against him, Naija News reports.