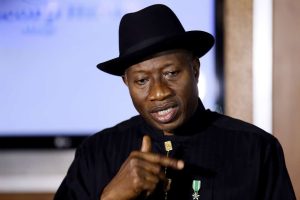 Some Northern Governors serving on the platform of the ruling All Progressives Congress (APC) have reportedly perfected plans for former President Goodluck Jonathan to defect to the party.

It was gathered the Governors who are said to be very influential within the APC also want to convince the party to give Jonathan its 2023 presidential ticket.

They reportedly want Jonathan to contest and win in 2023, knowing fully well that he can’t use more than four years, having already been the President between 2011 and 2015, then the North can return to power again after him.

The Governors according to a report monitored by Naija News on The Nation are however presenting a smokescreen of some Bayelsa politicians to spearhead the push while they give support from the background.

It was further gathered that the group of Bayelsa politicians is led by an APC chieftain and close political associate of Jonathan.

The source said: “Ten known politicians mainly from Bayelsa State have come together as a group. Their job is to start a media campaign on the need for the South-South to complete its tenure.

“They believe that since every other zone that produced the President ruled the country for eight years, the South-South should be allowed to complete its tenure.

“The four Northern Governors backing the return of Jonathan in 2023 wanted the South-South to start the campaign first while they play a supportive role in midwifing the process. They want the argument to originate from their zone of interest”.

The source added that the grand plan for Jonathan to return to power in 2023 is already gaining traction with several meetings held already and many more in the pipeline.

He observed that the fact that Jonathan can not use more than four years in office has made the plan very acceptable to the northern governors.

“The plan of these APC governors is to allow power return to the north after four years since Jonathan is entitled to only four years.

“The North believes that their tenure under the late President Musa Yar’Adua was cut short and they need to quickly return to power after 2023.”

“If the plan goes well, Jonathan will defect to the APC and significant number of politicians in PDP across the South-South including Bayelsa will join him,” he said.

It will be recalled that while former President Jonathan has not officially declared his interest in the 2023 presidential election, he has not also denied interest but has constantly been linked to the seat by political watchers across the country.

Meanwhile, former President of Nigeria, Olusegun Obasanjo, called on youths in the country to work together in making it uncomfortable for old leaders to remain in government.

Obasanjo stated this while speaking on a virtual interview with academic and historian, Toyin Falola, on Sunday.

The ex-president while answering a question from youth during the interview said, “You (youths) have everything going for you and I don’t want you to feel discouraged. Things are bad in Nigeria but I believe it is only for a short while because it depends on you.”

“Whatever my generation might have done wrong and I will be the first to admit that my generation has done a lot of wrongs, (but) it is for your generation to do it better.”