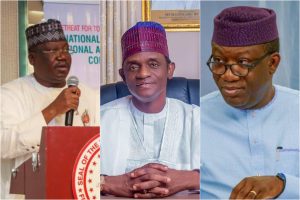 As the All Progressives Congress (APC) executive council prepares to convene today, there are indications that Senator Ahmad Lawan is facing a backlash from some senators.

The Sun reports that APC senators are now divided, while supporters of Ahmad Lawan are protesting against the extension of the party’s interim committee led y Yobe State Governor Mai Mala Buni, others opposed to it want it extended.

An unnamed APC senator said the rift between Senator Ahmad Lawan and Governor Buni was only for the 2023 presidential election.

He said Buni was seeking the vice-presidential seat if a southerner was elected president.

He said Lawan’s supporters, who are vying for the vice-presidential seat in 2023, are trying to ensure that they are appointed as party leaders because the governors have won.

“In the past, the Senate was a major bloc of the ruling party. The PDP couldn’t take a decision then without consulting the Senate. That has changed with APC. Today, the APC is moving on without any inputs from the Senate and that’s a bad sign ahead of 2023.

“If senators are unable to have a stake, many of them will be slaves to their governors before they will get return tickets in 2023. Unfortunately, the cold war between Lawan and Buni is not helping matters.

“The duo have their own ambition and that’s not good for us. They want to be running mates to whoever will emerge as presidential candidate of APC from the South in 2023.”