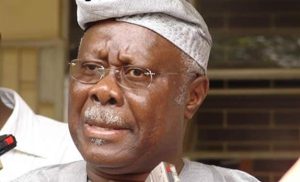 A former Deputy National Chairman of the Peoples Democratic Party (PDP), Chief Bode George, has declared that he is still keeping his cards close to his chest on contesting the 2023 presidential election in Nigeria or not.

George noted that 2023 is still far away and he has enough time to decide on the next political step before then.

He further highlighted the need to focus on building the image of the country in the meantime and delivering the dividends of democracy to Nigerians by those currently in power.

The PDP chieftain stated this when he hosted some youth groups at his Lugard office in Lagos, yesterday, noting that at the right time, he would reveal his stand on his candidacy for the 2023 presidency.

“People mooted it, initially we played and laughed over it but you see 2023 is a long haul from now and if people are wishing you well and are showing such good things to you, you don’t deflect it but time will tell.”

Naija News recalls earlier, the Pathfinder Consortium, a group led by Uthman Shodipe-Dosunmu, George’s special adviser, declared they will be supporting George to run for the presidency in 2023.

Speaking further on Wednesday, George called on President Muhammadu Buhari to manage the resources of the nation in the interest of Nigerians.

He said: “We know there are managers, our major concern should be what role are they playing. How well are they managing the resources of the country?

“2023 is still a long time from now, that is about three years from now. Who knows who would even be alive by then? So, let us do the needful first and stabilize the platform on which you are going to move.

“For me, I am more concerned now with the image of the country. If you see the image of our nation. I asked a simple question, where is that giant of Africa? You know that was our nickname before.

“That is why I said everybody, in every corner, cool your temper. Hunger has no tribal marks, hunger doesn’t wear religious caps and it is all over the country. If the platform is wobbling, a little wind can blow it up. We must not pray for that.”