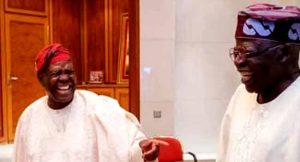 Former interim National Chairman of the All Progressives Congress (APC), Chief Bisi Akande has promised to speak with relevant stakeholders to support the candidacy of Asiwaju Bola Tinubu for the 2023 presidential election.

This is as he also promised to speak with Tinubu himself to accept the call from several quarters to contest the 2023 presidential election.

Akande made the promise when he hosted the members of the Southwest Agenda for Asiwaju Bola Ahmed Tinubu (SWAGA) at his home at Ila, Osun State.

The group was in his residence to felicitate with him on the occasion of his 82nd birthday and used the opportunity to brief him on their plans to present Tinubu as a presidential candidate and seek his support for their plans.

The group, led by Senator Dayo Adeyeye, specifically requested the elder statesman’s help in convincing Tinubu to run for the presidency in 2023.

In his remarks, Akande agreed with the suitability of Tinubu as a presidential candidate and promised to speak with the former Lagos State Governor as well as sell his candidacy to other prominent Yoruba elders and politicians.

He argued that based on the zoning and rotation agreement, power should shift to Southwest in 2023.

Naija News understands the coordinators of the SWAGA group from the six Southwest states of Ekiti, Ondo, Oyo, Ogun, Osun, and Lagos, as well as other party chieftains were in attendance at the parley.

Naija News reports that the Chief Press Secretary to Makinde, Taiwo Adisa, made this known in a statement.

Recall that Makinde and former Ekiti State governor, Ayodele Fayemi, are currently are loggerheads over who controls the zone for the PDP.

But Lagos PDP backed the Oyo State Governor during a stakeholders’ meeting at the government house, Ibadan, the state capital, on Saturday.