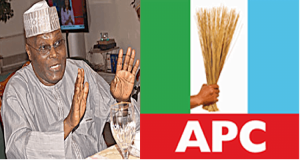 The All Progressives Congress (APC) has mocked former Vice President Atiku Abubakar who it claims is strategizing in Dubai to become the 2023 presidential candidate of the Peoples Democratic Party (PDP).

The APC in the statement on Thursday by its National Publicity Secretary, Yekini Nabena however declared that Nigerians won’t vote for him as “Nigerians are wiser.”

Nabena said this in a series of tweets where he also listed some PDP members who have decamped to APC and why more people will dump the party before the 2023 general elections.

Nabena alleged that Atiku is nursing plans to sell off national assets if he becomes Nigeria’s president.

“The PDP and Alh. Atiku Abubakar, who has began early 2023 campaign on the PDP’s presidential candidature he is poised to purchase, are engrossed with their Dubai meetings to plot their hallucinatory return to ensure their bid to selloff the remainder of our national assets”, he wrote.

Nabena added that the party repositioning embarked upon by the Mai Mala Buni caretaker committee is making the party attractive to more people and will guarantee success in 2023.

“It is not surprising that progressive-minded members of the Peoples Democratic Party (PDP) have been defecting enmasse from the opposition party to the All Progressives Congress (APC) in recent times.”

“For a party unable to run its Secretariat, pay staff salaries and its leadership grappling with a crisis of confidence, it will be unfair to expect its progressive-minded members to remain in the PDP which has failed woefully as the supposed ‘main’ opposition party in Nigeria.”

“It is disheartening that the PDP is pushing Nigeria into a largely one-party state. As a party that believes in democracy and progressive politics, the APC does not subscribe to this.”

“We, therefore, challenge other opposition political parties to take the place of the PDP because even as the governing party, we recognize the importance of rigorous and intelligent interrogation of our policies and programmes by the opposition which the PDP has woefully failed.”

“As a party, the APC welcomes new and returning entrants who have come to work with the President Muhammadu Buhari APC-led administration to improve the lives of Nigerians and overall better our dear country.”

“The party ranks greatly appreciate the important work the APC Caretaker/Extraordinary Convention Planning Committee (CECPC) under the Chairmanship of Governor Mai Mala Buni is doing to reposition the party by accomodating all interests and ensuring peace, unity, fairness, equity, justice and inclusion and internal democracy in our great party.”

“The Governor Buni-led CECPC is working assiduously and has achieved great success in ensuring that the Party is repositioned, united, and conducts the planned membership registration, update and revalidation exercise to produce a clean,credible and authentic national membership register ahead of the planned National Convention.”

“For now, the PDP and Alh. Atiku Abubakar who has began early 2023 campaign on the PDP’s presidential candidature he is poised to purchase, areengrossed with their Dubai meetings to plot their hallucinatory return to ensure thier bid to selloff the remainder of our national assets. Nigerians are wiser.”