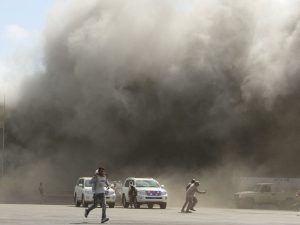 It has been reported of at least twenty-two casualties from a recent deadly terrorist attack targetted at Aden airport in the southern Yemeni city.

Naija News learnt that no fewer than fifty people survived the attack with severe injuries. Reports emerging from the Yemen city revealed that there was at least one explosion shortly after a plane conveying the city’s newly formed government arrived from neighbouring Saudi Arabia.

Although the prime minister of the war-torn country confirmed that he and his cabinet were fine, aid workers and officials were said to be among the casualties recorded as at the time this report was given.

Confirming the incident on Twitter a few hours ago, the Yemen Information Minister, Moammar Al-Eryani, labelled the Houthi rebels of a “cowardly terrorist act”.

He tweeted: “Information indicates that 1 journalist died in the cowardly terrorist incident that targeted Aden airport &10 injured who came to cover govt arrival.

“We pray for mercy to all the martyrs, our condolences to their families, &speedy recovery for wounded.

“Targeting airports, facilities &civilian objects is behaviour of terrorist Houthi militia, &its record of targeting journalists is full of 100s of crimes, as dozens of journalist died by it, &its crimes against journalists exceeded that of ISIS & Al Qaeda acc. to intl statistics.

“We call on intl community & orgs concerned w journalists to condemn this terrorist crime, show solidarity w victims &include Houthis militia in terrorist groups &include them in blacklist of those who target journalists, &prosecute its leadership for committing war crimes.”

1-Information indicates that 1 journalist died in the cowardly terrorist incident that targeted Aden airport &10 injured who came to cover govt arrival.
We prey for mercy to all the martyrs, our condolences to their families, &speedy recovery for wounded

In another news earlier, Naija News reports that Solomon Aboh Akonghfe, special assistant on aviation to Governor Ben Ayade of Cross River State has been accused of sexually molesting a woman in the guise of helping her to secure a job.