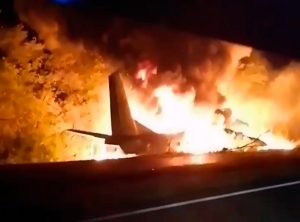 20 out of 28 passengers on a Ukraine military plane has reportedly died after the plane crash-landed in the Kharkiv region in the east of the country.

According to the report confirmed in a statement by Ukraine’s Interior Ministry on Friday, September 25, no fewer than twenty persons died from the crash which involved the Antonov-26 transport plane conveying crew and cadets.

The ministry revealed further that there were 20 dead and two seriously injured among the 24 passengers.

“The transport plane was carrying a total of 28 passengers when it crashed, including 21 military students and seven crew,”

“It’s a shock, at the moment it’s impossible to establish the cause” of the crash.”

On his part, while reacting to the sad development, Ukrainian President Volodymyr Zelensky said he would travel to the region on Saturday to know more about the incident.

He said, “We are urgently creating a commission to investigate all the circumstances and causes of the tragedy,”

AFP reports that the plane caught fire after the crash and was extinguished an hour later. Findings revealed that the town of Chuhuiv is around 30 kilometres Southeast of Kharkiv and 100 kilometres west of the front line with the pro-Russian separatists.

This is coming barely two months after about 11 people escaped death in a United Nations plane crash in Mali, Naija News reports.