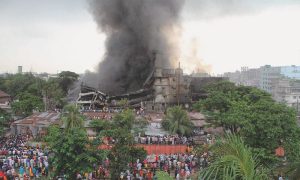 The Police on Saturday stated that worshippers were at Friday evening prayers when the blast sent a ball of flames through the mosque in the central district of Narayanganj.

It is suspected that a spark from an air conditioner set off the gas.

“When they shut the windows and doors and switched on the air conditioners there was an electricity spark that led to the explosion inside the mosque.”

37 taken to a specialist burns hospital in Dhaka in critical condition with 12 of them later dying from injuries, said hospital spokesman Samanta Lal Sen.

He added that all had suffered 70 to 80 per cent burns.

Police said at least 45 people were injured by the blast and that people had spoken of smelling a gas leak.