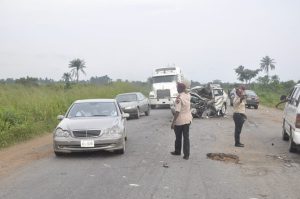 At least 10 persons lost their lives on Friday, 25th December in an accident which occured along the Ilorin-Idofian expressway in Kwara State.

This development was confirmed in a statement by the Kwara State Command of the Federal Road Safety Corps (FRSC).

The FRSC Kwara sector commander, Jonathan Owoade said overspeeding and wrongful overtaking was responsible for the accident and 27 people were involved.

He said: “It is another sad incident occurring on the Idofian-Ilorin road axis.

“Twenty-seven people were involved, sadly 10 died, nine of them burnt beyond recognition, while 16 persons sustained various degrees of injuries.

One other person was rescued unhurt,” the Sector Commander said.

Those injured in the accident have been evacuated to the Kwara State General Hospital and the University of Ilorin Teaching Hospital and others were also taken to Ile Anu Medical Centre at Idofian.

He added that the corpses of those who lost their lives have been deposited at UITH and further urged all forms of road users to be careful particularly during the festive seasons when there are more road users.

In another news, President Muhammadu Buhari has said he feels frustrated every time there is a security attack in Nigeria.

Buhari, who made the remarks on Thursday in his Christmas message to Nigerian Christians, also called on Nigerians to be more determined to support the military and other security agencies in the fight against terrorism.